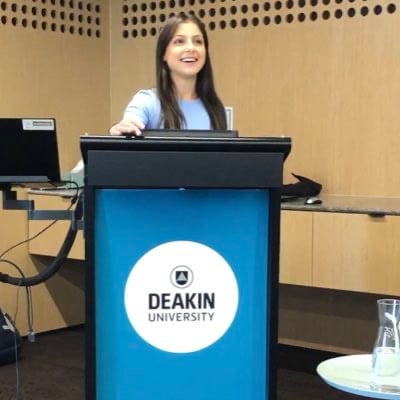 Dr Mary Iliadis is a Lecturer in Criminology in the School of Humanities and Social Sciences at Deakin University. She is also a committee member of the Australian and New Zealand Society of Criminology as Newsletter Editor, and the Early Career Researcher Representative for the Faculty of Arts and Education Research Committee at Deakin.

Mary’s research adopts a socio-legal framework to explore, critique and impact the rights and treatment of victims of sexual violence in criminal justice systems. Mary’s research is international in scope and examines the rights and protections afforded to victims in policy and practice across England and Wales, Ireland and Australia. More broadly, Mary researches prosecutorial discretion and explores how access to justice is negotiated for victims in criminal trials.

Mary has published in leading criminology and law journals, including in the British Journal of Criminology, Criminology & Criminal Justice and Monash University Law Review. Mary’s first book, Adversarial Justice and Victims’ Rights: Reconceptualising the Role of Sexual Assault Victims, has been published with Routledge (2020) and features in Professor Sandra Walklate’s and Professor Kerry Carrington’s highly distinguished Victims, Culture and Society series. In February 2019, Mary was nominated as a Semi-Finalist for The Bridge Create Change Award (Seven News Young Achiever Awards).

Mary’s research has gained traction in government circles and her findings were cited in the Victorian Law Reform Commission’s report on The Role of Victims of Crime in the Criminal Trial (2016), demonstrating a high-level of impact as an ECR. Mary also received outstanding recognition of her submission to Northern Ireland’s Gillen Review into The Laws and Procedures in Serious Sexual Offences. The Chair of the Review, Sir John Gillen – a retired Judge of Belfast’s High Court, described Mary’s submission as ‘absolutely invaluable, serving to inform the Advisory Board’s views on this issue [on sexual history evidence] in a manner that otherwise would not have been possible’.

Mary also conducts research in the areas of public, newsmaking and digital criminology. She is currently co-authoring a book titled, Criminology and the Media: International Experiences and Perspectives, with Dr Mark Wood (Deakin University) and Dr Imogen Richards (Deakin University). This research project is the first to present a quantitative and qualitative analysis of criminologists’ perceptions and practices in relation to newsmaking and public criminology in an era of post-broadcast engagement. It accounts for criminologists’ perceptions of the benefits of public criminological scholarship, as well as perceived political, ethical and logistical limitations across Australia, New Zealand, Canada, the US, the UK, Africa and Ireland.

Mary has received outstanding recognition for her contributions to teaching and learning at Deakin University, including letters of commendation from Deakin University’s Head of School for her exceptionally high teaching evaluations in Crime, Victims and Justice (ACR203) in 2018 and 2019, Crime, Media and Justice (ACR204) in 2018 and 2019, and Honours Thesis Presentation (AIX494).

In 2017, Mary was awarded with a Faculty of Arts Citation for Outstanding Contributions to Student Learning with colleague, Associate Professor Asher Flynn, for their innovative and sustained contributions to teaching and supporting students in Criminology, and for fostering a sense of ownership, independence and engagement in student learning at Monash University. In 2016, Mary received a letter of commendation from Monash University’s Vice Provost (Learning and Teaching) for her high teaching evaluations in Victims, Justice and the Law, which ranked in the top 8% of all subjects offered at Monash in semester 1, 2016.