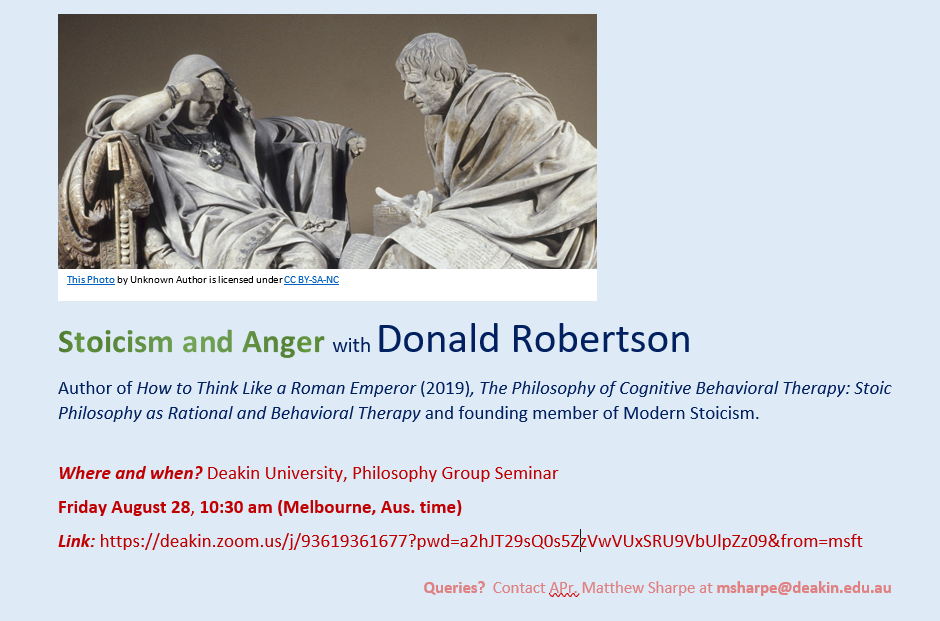 The Stoics considered anger to be the main focus of their therapy of the soul.  We’re lucky enough to have an entire text by Seneca, On Anger, but Marcus Aurelius also talks extensively about anger in The Meditations.  In one key passage, he lists ten distinct cognitive strategies for coping with anger, which can be compared to strategies employed in modern cognitive-behavioural therapy (CBT).  In this paper, I will examine the Stoic conception of anger, and how we might manage anger, as these subjects are treated in Seneca, Marcus, and the other extant texts.

Donald Robertson (MA Aberdeen, MA Sheffield) is the author of six books including How to Think Like a Roman Emperor: The Stoic Philosophy of Marcus Aurelius (2019) and Stoic Philosophy as Rational and Cognitive Psychotherapy (2010).  He is a cognitive-behavioural psychotherapist, writer, and trainer, specializing in the relationship between philosophy, psychology, and self-improvement. He’s particularly known for his work on Stoic philosophy and cognitive-behavioural therapy. Donald is a founding member of the Modern Stoicism group, an interdisciplinary non-profit organisation dedicated to the teaching and practice of Stoic philosophy, including the annual ‘Live like a Stoic’ weeks and global Stoicon and Stoicon-X events.