Today we’re interviewing Rob McDonald – aka R.W.R. McDonald – author of The Nancys, a novel published in June 2019 by Allen & Unwin. Rob is not just a debut novelist of a funny, dark yet heart-warming novel that was a Highly Commended Unpublished Manuscript in the 2017 Victorian Premier’s Literary Awards. He’s also a Deakin professional staff member, working as the International Manager for the Faculty of Business and Law.

You can borrow The Nancys through Deakin Library. Rob spoke to us about his writing journey, his debut novel and what advice he’d give to students and staff who dream of getting their own publishing deal one day.

How long have you been writing fiction?

Since I was five and learnt how to write really, but up until 2016 I had always written for myself and had never prioritised it. I had written first drafts of short stories, a crime novella and then two first draft film scripts. I had tried writing a novel but got lost after ten thousand words. In 2016 I enrolled in Faber Academy Writing a Novel to learn how and it was there I wrote the first draft of The Nancys.

What made you want to be a writer?

I’ve always loved writing and story; it is innate and when I am doing it time ceases to exist.

How do you balance writing with your current job at Deakin?

It isn’t easy. I set myself a weekly word count target and write in snatches of time. I have a long commute so I write on public transport, sometimes at lunch, at night and on the weekends. When it came to the structural edit and copy edit deadlines, I took annual leave. Deakin International (where I was working during writing and publication) are fantastic when it came to taking leave to promote the book when it was published, incredibly supportive and Deakin represented at my launch at Readings Carlton. What is The Nancys about?

It is an adult murder mystery with amateur detectives. 11-year-old Tippy Chan teams up with her irresponsible babysitters – Uncle Pike and his glamazon boyfriend Devon – to form The Nancys, a secret detective club, to try and solve her teacher’s murder in smalltown New Zealand. It is whodunit but also a story about family and the courage to speak up for the truth.

What gave you the idea for The Nancys?

I had just finished writing a script for a horror film and wanted to give writing a whodunit a try. I have always loved murder mysteries and the idea of a puzzle within a story seemed like a great challenge. When I started to write it the first thing that came to me was the internal thought of a child who was investigating a murder. Discovering who this child was, why they were investigating a murder and who would allow them to in the first place led me down the rabbit hole to discovering The Nancys and their world.

What do you hope people get out of reading your book?

Joy, comfort and hope, as well as a laugh and the feeling they have made some new friends.

How did you get your book deal?

I entered the 2017 Victorian Premier’s Literary Awards for an Unpublished Manuscript where The Nancys got Highly Commended. Off the back of that, I was contacted by Grace Heifetz at Curtis Brown who became my agent. She worked with me getting the manuscript polished and after several more drafts submitted it to publishers. From there we got a couple of offers and I went with Jane Palfreyman at Allen and Unwin.

What advice would you give to people who want to get a book published?

Go for it and don’t give up. The beauty of writing is there is no age limit and the world needs more stories, more points of view. If you haven’t already, learn the craft. Enter unpublished competitions and definitely seek professional feedback before submitting to publishers.

As part of the ongoing building works on campus, Burwood Library will be closed from 8am to 5pm on Saturday… 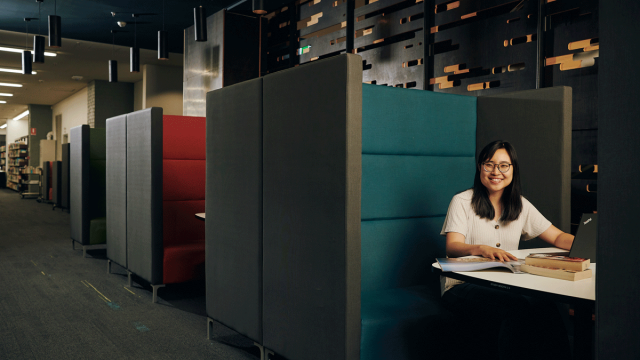 Five tips to get you started in the library

No matter what or where you study, the library will be a key part of your success at Deakin. While…