Deakin’s A/Prof Matthew Sharpe and Dr Federico Testa (postdoctoral fellow at the University of Warwick) have just released The Selected Works of Pierre Hadot: Philosophy as Practice (Bloomsbury, 2020), a new selection of Hadot’s work including material never before translated:

As a passionate proponent of ph 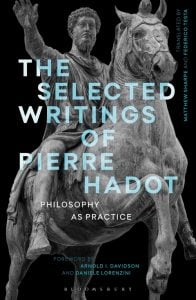 ilosophy as a ‘way of life’ (most powerfully communicated in the life of Socrates), Pierre Hadot rejuvenated interest in the ancient philosophers and developed a philosophy based on their work which is peculiarly contemporary. His radical recasting of philosophy in the West was both provocative and substantial. Indeed, Michel Foucault cites Pierre Hadot as a major influence on his work.