A/Prof Matthew Sharpe will be presenting a University of Sydney Critical Antiquities Workshop on ‘Lucian (or Lycinus) on how (not) to choose (a) Philosophy’,  Friday 5 March 11am-12:30pm AEDST: 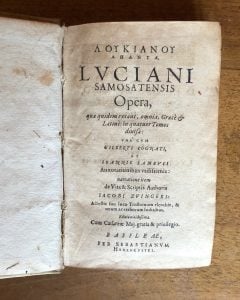 Lucian’s Hermotimus has attracted comparatively little critical attention. Yet it is one of Lucian’s longer texts, and of all of his texts, the closest in form to a Platonic, Socratic dialogue. Hermotimus, an aspiring Stoic, converses with the more sceptical Lycinus, who affects concern to understand how Hermotimus came to choose this philosophical way of life, and not others. Why did Hermotimus become a Stoic, rather than an Epicurean, or Platonist, etc.? If he knew enough to choose a philosophy wisely, wouldn’t that only be possible if he were already wise? He would then not need a philosophy at all. But if he didn’t know enough to be sure the Stoic path was the true way to wisdom, won’t his decision to become a Stoic have been little more than a stab in the dark? Philosophy will hence not be meaningfully different from a religion or superstition. By posing this dilemma, I will contend, this artful dialogue asks questions which remain relevant for young students today, as they are confronted with competing philosophical and theoretical perspectives which bid for their allegiance. In this way, it echoes and aims to complement Plato’s educational reflections, as certain signs in the text flag. The dialogue in addition poses dilemmas also for us as teachers, in differentiating between philosophical training and indoctrination to one or other sectarian perspective. If there is no good reason to become a Platonist rather than a Bourdieuian, a Camusian rather than a Agambenian, etc., or if any such reasons can only emerge having studied for many years in one perspective or another, aren’t we forced to admit that the love of wisdom is groundless, founded on an arbitrary leap of faith, perhaps nudged along by charismatic teachers? I argue that at several moments, Lucian’s dialogue suggests a different possibility, but one which turns upon a self-reflective turn from content to form: to learn to philosophise in a way which is distinguishable from what we would call ‘blind faith’ is to learn to be able to ask questions, and above all, to learn to question the epistemic bases of one’s own beliefs, and even to be courageous enough to retract them in the face of rebuttal. But this is uncomfortable, unglamorous, and social factors also push against it. So, it is telling that Hermotimus ends the dialogue by wishing to leave philosophising behind altogether.