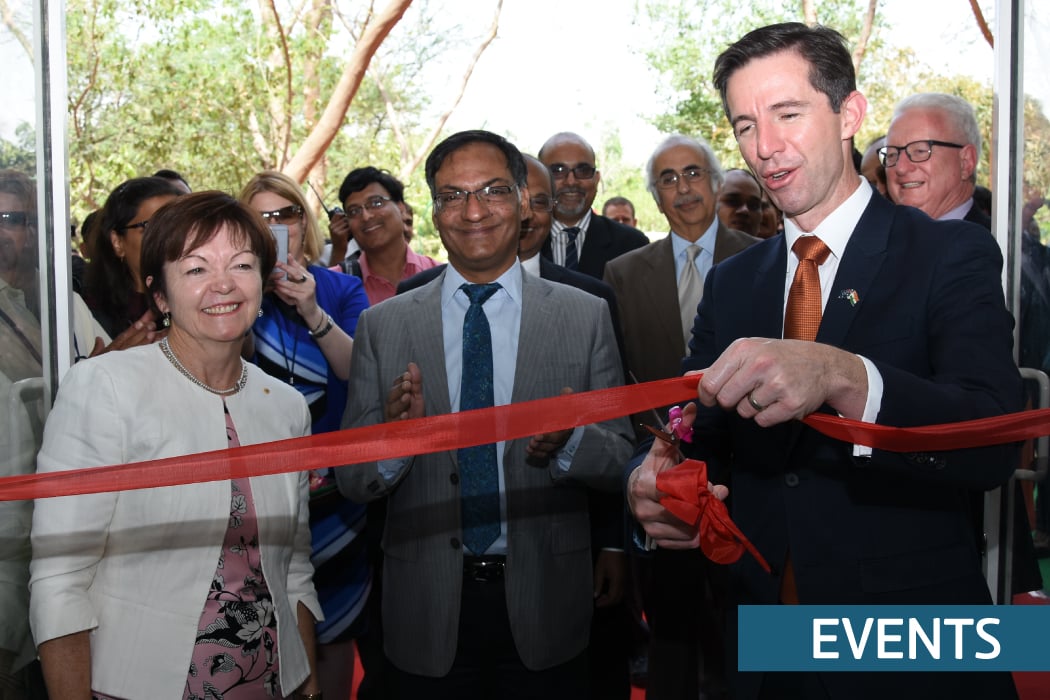 Research into global challenges around food security and sustainable agriculture has received a boost thanks to an expansion of the world’s first dedicated nano-biotechnology research centre, officially opened on Monday in India.

The new, state-of-the-art facility, a partnership between Deakin University and The Energy and Resources Institute of India (TERI), was inaugurated yesterday afternoon by Australian Prime Minister the Honourable Malcolm Turnbull and Indian Prime Minister the Honourable Narendra Modi. The two leaders remotely opened the facility during a press conference ahead of a State Banquet at the Hyderabad House in New Delhi. 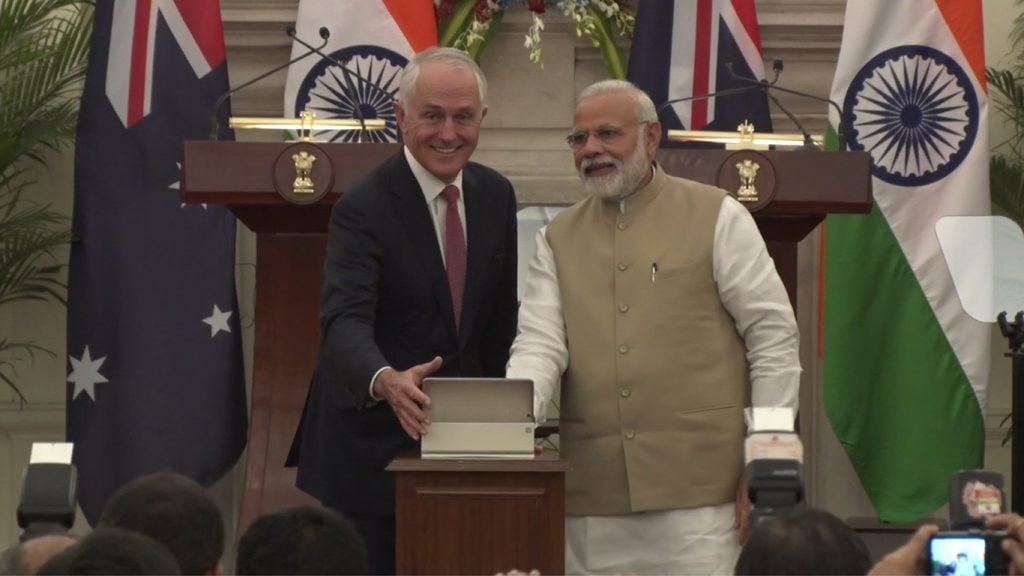 Addressing the media, the two prime ministers spoke of the vital importance of the education links between the two countries.

“Both India and Australia recognise the central value of education and innovation in the prosperity of all societies. It is not surprising that cooperation in the field of education and research is one of the most important aspects of our engagement,” Prime Minister Modi said.

“Prime Minister [Turnbull] and I have just inaugurated the TERI-Deakin Research Centre… which is a classic example of the kind of cutting-edge science and technology cooperation that is happening between our two countries,” he added, noting that India’s research collaboration with Australian universities promised to produced “tangible outcomes that will improve the lives of millions.” 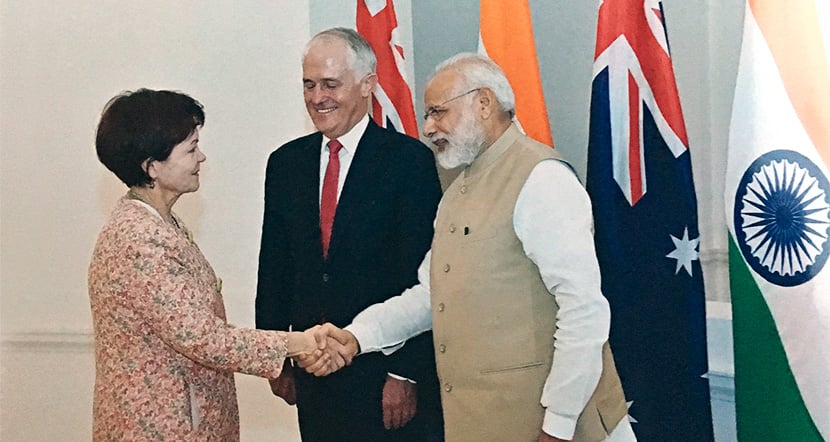 Prime Minister Turnbull in his remarks highlighted India as a primary partner in research collaboration and stressed that Australia has the capacity “to make a very substantial contribution to India’s growth and development”.

“We’re already working together to harness the creativity and drive of our best and brightest minds,” he added, pointing to the new TERI–Deakin facility as an illustrative example. “This research centre will bring up to 100 researchers together to solve some of the world’s biggest problems, from developing biofuels to early detection of crop diseases to improved productivity. And these are practical solutions with commercial prospects for both of our countries.”

The prime ministers’ inauguration was followed on Tuesday by another ceremony on the TERI campus, where Minister Birmingham presided over a ribbon cutting ceremony attended by Indian officials and academics from TERI and Deakin. 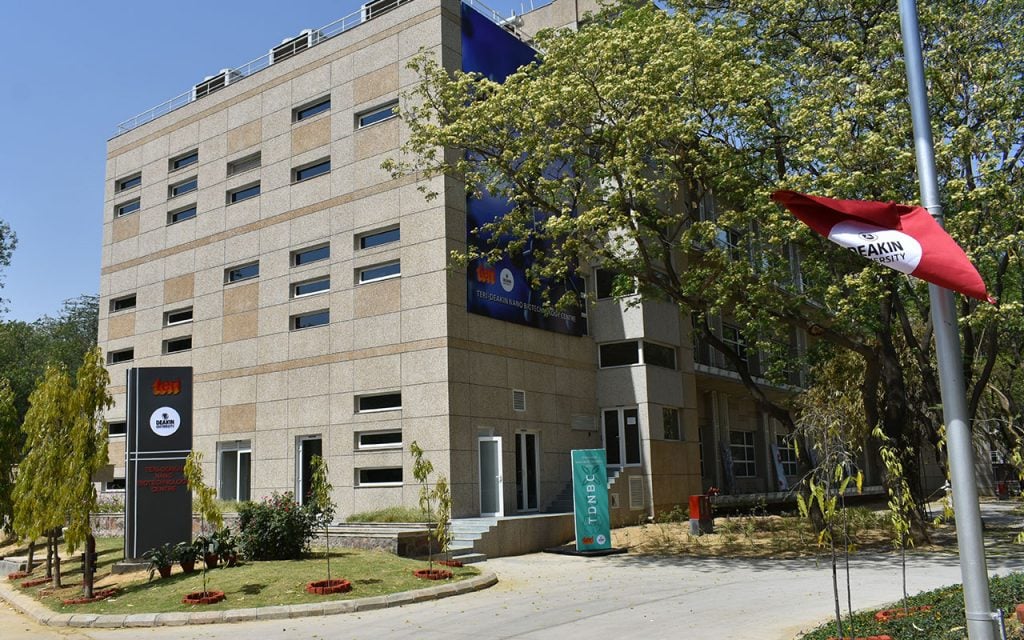 The new facility serves as an expansion of the Deakin–TERI Nano-Biotechnology Centre (TDNBC), located at Gual Pahari near New Delhi. Established in 2010, the Centre promotes a sustainable future through innovative research in nano-biotechnology, the use of nanotechnology to study and influence biological systems or generate products through biotechnology at a molecular level.

“With depleting natural resources and an increasing demand for food and medicines, the role of nano-biotechnology has never been more crucial to countries such as Australia and India, which are challenged by environmentally significant factors, such as unreliable rainfall, poor soils and climate change,” Professor den Hollander said.

“These are vital issues for humanity and it is extremely satisfying to think of the hugely positive implications of this research.

“Deakin is passionate about supporting the communities we serve and ensuring our graduates are prepared for the jobs of the future. This partnership helps to ensure we can do that, while helping to make a real difference to populations around the world.”

The new cutting-edge facility features the most advanced laboratories and equipment for researchers, and is currently home to 16 full-time research scientists, 13 research/ technical staff and seven PhD students who are enrolled at Deakin under the co-supervision program with TERI.

Eight PhD thesis have already been awarded based on research performed at TDNBC, and it is envisaged that, within five years, the Centre will have approximately 50 PhD students pursuing a doctorate through the University’s innovative Deakin India Research Initiative (DIRI). To date Deakin has invested more than $10 million in the DIRI program as part of the University’s commitment to research collaboration in India.

“As the first Australian university to establish an office in India in 1994, Deakin is proud to continue to strengthen our relationship each year, providing opportunities to students around the world and helping to improve lives both in India and Australia,” Professor den Hollander said.

In its 23 years in India, Deakin has developed more than 40 strategic research and academic partnerships and 15 corporate partnerships with India’s leading universities, research institutions and corporations.

Find out more about the TERI-Deakin Nano Biotechnology Centre or to learn more about Deakin University and opportunities for international students, visit the Deakin International webpage or ask a question below.