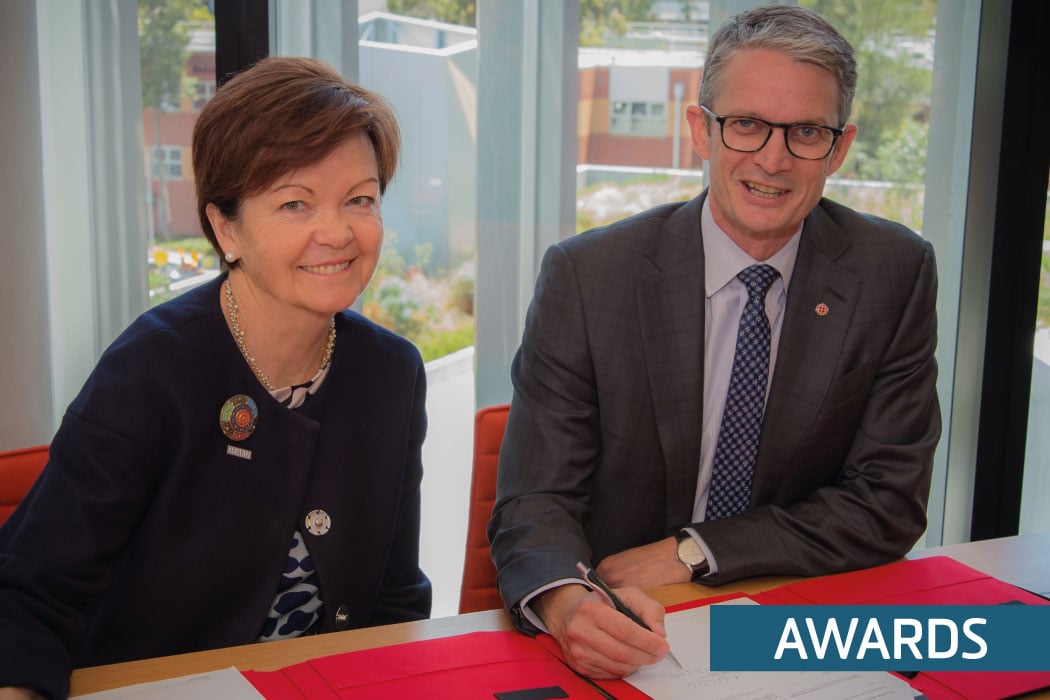 For her many years of service and leadership in higher education, Deakin University Vice-Chancellor Professor Jane den Hollander was recently honoured with the Officer of the Order of Australia (AO) medal – one of the highest honours that can be bestowed in Australia.

Awarded last week by the Governor-General as part of the 2017 Australia Day Honours, the AO is a national honour to recognise individuals who have made outstanding contributions that benefit their communities, and ultimately Australia or humanity in general.

In the citation for her AO, the Vice-Chancellor was recognised for ‘distinguished service to tertiary education through a range of executive administration and advisory roles, as a supporter of professional educational organisations, and to the community.’

In accepting the award, the Vice-Chancellor stressed that it belonged to the entire Deakin University community. ‘It’s a great honour. We’re being acknowledged for our contribution to the community,’ Professor den Hollander said.

‘The University has done a lot in Geelong and I have been the figurehead for incredible amounts of work done by people around me. So I’ve taken it as a great acknowledgement that Deakin is on the right track in Geelong and that’s fantastic.

‘That’s not to underestimate what we do in Melbourne. And the work we’re doing in the cloud is bleeding edge and taking us to a new level in managing our students’ experience. But if I have to think of one community that has really benefitted, it would be the people of Geelong.

‘So I say, thank you to the community for wrapping its arms around Deakin. My AO reflects the success of this community in our understanding of what good education and good research can do. It can make a difference and we have as a community.’

A career in education

Professor den Hollander said education was highly valued in her family during her childhood in South Africa. If she misbehaved, her parents would make her read the Encyclopaedia Britannica as punishment. ‘I knew everything in volumes A to M, but not so much in N to Z,’ she said.

As a university student in Johannesburg, the Vice-Chancellor began to understand the privilege of being born white and being able to gain a good education. That exposure to racial exclusion fuelled a life-long passion for equity and access to education for all who want it that has shaped her career.

‘I’ve always understood that I’m lucky, that I have a very privileged life.’

“I’m striving to uphold the Act but to do that in a contemporary twenty-first century situation. So what does access and participation mean today? It means to be the best university at the digital frontier, education for the jobs of the future, staying contemporary, making sure that we do that in a very inclusive way, that anybody who wishes to get a university education can choose Deakin and get the learning and skills they need.”

Reacting to the AO announcement

‘I told my mother and she’s absolutely thrilled,’ the Vice-Chancellor said. ‘She’s going to tell everyone we know. She is 92 and she made sure her children were educated. She gave us the work ethic to be good and do good. She deserves the accolades, as none of my opportunities were ever available to her.’

Stepping up and assuming leadership roles

The Vice-Chancellor serves on several boards including Skilling the Bay, the Kardinia Park Trust, UniSuper and the Australia India Education Council.

‘My view is that if you don’t put your hand up you mostly miss out on what might be wonderful opportunities to be part of new ideas with interesting motivated people. Getting involved is often hard work, but it makes a difference and you could actually have some fun. That has been my experience,’ she said.

‘I believe we must all work to ensure violence against women is eradicated and that education for all, including women, is a basic human right. So the best way for us to help the world is to do it well in Australia across all cultures and all ages. Let’s be an example to others, rather than catching up.’

Hopes for the future

Looking to the future, the VC shares her professional and personal aims: ‘That Deakin is the best university we can be for the communities we serve. This remains a work in progress that I know we share as the Deakin community. And at a personal level I wish to leave Deakin in the best shape possible for the next stage of its journey,” Professor den Hollander said.

To learn more about Deakin University and opportunities for international students, visit the Deakin International webpage or ask a question below.