By Equity and Diversity

We’re proud of Deakin’s culture and continue to nurture its development as one that values diversity, enables access and promotes inclusion.

It’s a significant time in Australia if you’re part of the LGBTIQ+ community. The passing of the same-sex marriage legislation will mean that all couples, gay or straight, can get married from 9 January 2018. This triumph for queer rights in Australia has put the experiences of LGBTIQ+ people firmly on the agenda and is a step in the direction of equality.

But there’s still a long way to go. One way you can show your support for queer rights is to join Deakin at the Midsumma Pride March on Sunday 28 January 2018 in St Kilda. Part parade, part party, Pride March celebrates the LGBTIQ+ community and is a colourful display of unity and inclusion.

At Deakin, we support diversity and we believe it’s important for queer voices to be heard. In the lead up to Pride March, we interviewed Charlie Osborne, a Deakin student, a queer person and an aspiring youth advocacy worker. We spoke to Charlie about their experiences discovering their identity, the ups and downs of queer activism, the Queer Society at Deakin and the bittersweet victory of the same-sex marriage vote. 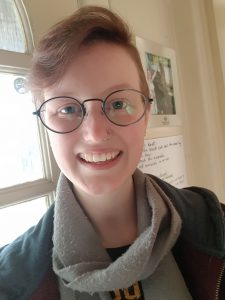 Deakin Life: What are you studying at Deakin?

Charlie: I’m almost finished my Bachelor of Arts, with majors in Public Relations and Professional and Creative Writing.

DL: What does Pride March mean to you and why is it important that students and staff attend?

C: Pride March, to me, is a chance to be out, proud and loud about who we are. Pride March is not about fighting for change, but it is about awareness. To be perfectly honest, it doesn’t matter whether we are fighting for change or just want to be seen, all queer marches are important and will show the public that we aren’t just a few people, we are your friends, your family, your colleagues, the people you walk past in the street. Being queer is normal.

DL: Have you been to Pride March before? Or any other marches/rallies?

C: I have been to a couple. In 2016, I organised the Deakin Pride Queer Society (DPQS) marching group for Pride March. Before that I had been to two marriage equality rallies. I found all of the times I have gone to be incredibly overwhelming and intense, but also positive at the same time. It’s so nice to be a part of one united force that all want the same thing. It really helps to feel like the community is actually a community.

DL: Tell us about your experience as a member of the LGBTIQ+ community, both personally and at Deakin.

C: I realised I was queer when I was 17, and I honestly haven’t stopped learning about myself since. For most people, being queer is a series of coming outs, discoveries and learning, it doesn’t ever really end. I discovered and rehashed my identity at 17, at 18, at 19, at 20, and even now I am just about 21 and I’m still learning. I am a non-binary person, who is asexual and a bit confused in the romantic department. It took me a while to get to this point. It’s a process, as is getting involved with the community. Before I came to uni I had a few friends that were queer, but no one I really trusted. But once I hit uni, I made friends, I discovered new and different identities, I learned more about what it is to be queer from other people. This occurred when I was a part of DPQS and from being involved in other queer programs.

DL: Are you involved in any Deakin/community/activist groups?

C: I used to be quite actively involved in DPQS. Since buckling down to get my degree completed by July 2018, it has been a lot harder to be involved. I still see the friends I made through the club, and I still cherish my time there. It was the best thing I could have ever asked for. I am also involved in a program called YGLAM. It’s a queer performing arts group run out of Moreland. It is one of the best things I have ever done, as I feel so at home there. I am also helping to start a new group in the City of Casey. It’s an area where youth are disadvantaged and often feel like they can’t be themselves for fear of persecution. So we are working on putting this group together in order to help combat that and give these youth a safe space.

DL: How has the passing of the same-sex marriage legislation affected you?

C: I’m happy it got passed. I had been feeling quite ashamed to be Australian, but now I feel a little less ashamed. Still annoyed that it took this long, but hey, at least it happened! I am also aware that there are so many other things that need to be changed, so many things that relate to me more personally. I don’t really plan on ever getting married, but I would like to have my gender be marked as non-binary on all my legal documents, and I would my title to be ‘Mx’ and just have my use of they/them/their pronouns recognised no matter where I go. It’s going to be a long road, one that I don’t see changing that much in my lifetime, and the change in legislation made me realise how sad I am about that.

DL: What advice do you have for other LGBTIQ+ Deakin students and allies that might be unsure about how to get involved on campus?

C: There are two pathways you can go if you’re an ally. You can either join DPQS, or get involved with the LGBTIQ+ Community that is run out of Equity and Diversity. If you’re queer, the best thing you can do is join the DPQS. You can sign up on the DUSA website or at O Week. Or you can just go into the queer room and say hi. It can be daunting, but trust me: everyone is really friendly and they have been there before. They will make you feel welcome and loved, guaranteed.

DL: What are your career and/or personal goals? What do you want to do when you graduate?

C: Career wise I would love to see myself working for a not-for-profit like Minus 18 or YACVic or something similar as their public relations or communications representative. Personally, I really want to write and publish a novel. It’s been a lifelong dream of mine, and I would really love to see it happen. I would also love to have my PhD, which is something I am going to work towards, but it may be a while away yet. When I graduate I am going to start working towards these things. I am passionate and determined, so I know I will be able to make them happen, I just need to get cracking.

Don’t forget to save the date for Pride March 2018 and march alongside our Vice-Chancellor, our LGBTIQ+ community and allies.

The Pride March will kick off around 2pm with a pre-march procession by Dykes on Bikes followed by thousands of marchers. We will have pre-march refreshments (plus some shade if it is hot) and a post-march gathering at Catani Gardens until 7pm.

Register your interest now so we can keep you up to date with all the details. And visit the Midsumma website for more information. You can also learn more about the Deakin LGBTIQ+ Community here, and DPQS here.