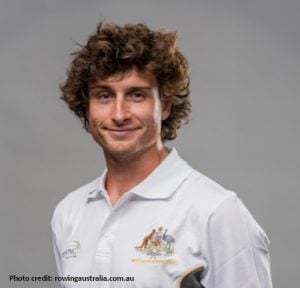 It’s been a huge year for Joshua Dunkley-Smith and after achieving silver medal in the Men’s 4 World Rowing Cup in 2015, Joshua is studying a Mechatronics Engineering degree by distance at Deakin University, Geelong. Joshua first took up rowing at the age of 15 at Geelong College and first competed at a major international competition when he was fourth in the men’s eight at the 2009 U23 World Championships.

Joshua’s mother, Addy Bucek is a dual Olympian in sailing – 1992 Barcelona and 1996 Atlanta Games. “I grew up watching her training and competing since before I could remember. I always thought she was tough, sailing out into rough, cold weather every day while I got to stay warm and dry on land”.

Joshua already has an Olympic silver medal from London. He is currently with his team, training hard in their boat in Italy prior to heading to Poland for the last World Cup before the Olympic Games. The team will then return to Italy for final preparations for Rio.

Even though Joshua’s home base is in Geelong near the campus – he studies Mechatronics Engineering by distance due to the travel commitments of rowing. Joshua has needed to defer some units in 2016 given that the exams fell right on the Olympic trialling weeks. It is also a challenge completing practical units when he is on the other side of the world.

Long term Joshua wants to work as an engineer whilst still competing at sport.

We wish Joshua all the best in his preparations for Rio and look forward to watching him row for Gold at Rio.

Deakin in an Elite Athlete Friendly University and values the contribution of all students representing the University in games and tournaments at home and in the world.