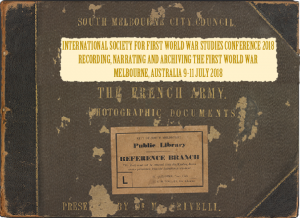 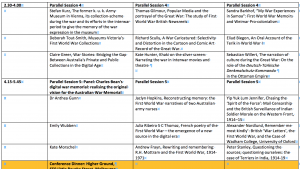 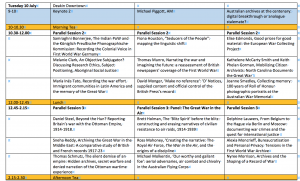 War’s End, or War without End?

Reflections on a century since the Great War

The Contemporary History Research Group, Faculty of Arts and Education, Deakin University, Geelong, is hosting a seminar and public lectures on 12 and 13 July 2018 to reflect upon the legacies of the First World War in Australian and World history.

These events are supported by the Australian Government’s ANZAC Centenary Commemorative Fund.

Papers are invited on any theme dealing with the end of war and its legacies, in an Australian and international context. Some examples might include:

Papers that reflect on the centenary commemorations of the war and the role of the Centenary as a ‘site of memory’ are particularly encouraged.

This event will be held over two days:

A seminar will be held on 12 July 2018 at Deakin University’s Waterfront Campus in Geelong.

Following this, selected papers will be welcomed for presentation at a public forum at the Geelong Regional Library and Heritage Centre on the afternoon and evening of 13 July 2018.

Guest speaker for these events is Professor Bruno Cabanes, Donald and Mary Dunn Chair of Modern Military History at Ohio State University. Professor Cabanes is the author of a number of books in French and English on the First World War and the international humanitarianism that followed, including The Great War and the Origins of Humanitarianism, 1918-1924 (Cambridge University Press, 2014), August 1914. France, the Great War and a Month that Changed the World Forever (Yale University Press, 2016), and a chapter on ‘1919: Aftermath’ in Jay Winter’s Cambridge History of the First World War (2014). He serves on the advisory boards of the Historial de la Grande Guerre at Péronne, and the Museum of the Great War at Verdun.

A small grant will be available to assist selected authors prepare a manuscript for publication in a collected edition.