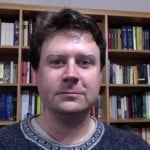 Dr Samuel Koehne works in the field of Modern European History, focusing particularly on the interrelations between religion, politics and nationalism. He is an expert on Nazism and religion, and has a developed international profile owing to a series of publications in world-class journals.

In 2013, Dr Koehne published an article on the ways in which the famous American illustrator Norman Rockwell paid homage to the nineteenth century German artist Carl Spitzweg through his work The Bookworm. In Deakin Speaking, he considers the much larger impact of this article, including a recent exhibition at an American Museum of Art, and the ways in which others have paid their own kind of homage to his paper.