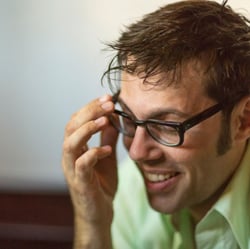 David Boarder Giles writes about waste, cities, and social movements. His current projects all explore the ways in which discarded surpluses—of people, places, and things—are circulated in “global” cities. These interests draw him into a range of spaces and problems, from the twin crises of food insecurity and food waste that plague so many cities, to the alternative economies established by dumpster divers and other urban scroungers, from the spectacular “world-class” image to which many major cities aspire to the prejudice and exclusion that shape public space and criminalise the existence of the homeless who sleep on their streets. This work brings him into dialogue with economic anthropology, environmental anthropology, urban ethnography, and political anthropology.

His book, “A Mass Conspiracy to Feed People”: World Class Waste and the Struggle for the Global City, is based on extensive ethnographic fieldwork in Seattle and several other cities in the United States and Australasia with Dumpster divers, squatters, grassroots activists, homeless residents, and chapters of Food Not Bombs – a global movement of grassroots soup kitchens. The book is due to be published by Duke University Press in late 2018.

David is also committed to public scholarship, and co-produces the podcast Conversations in [email protected] with his colleague Dr Timothy Neale. In addition, David speaks and writes about his work in a range of publicly venues, including this episode of Conversations with Richard Fidler, and this interview for UQ’s online course, World 101X.

More details on David’s research and public scholarship can be found at his blog.