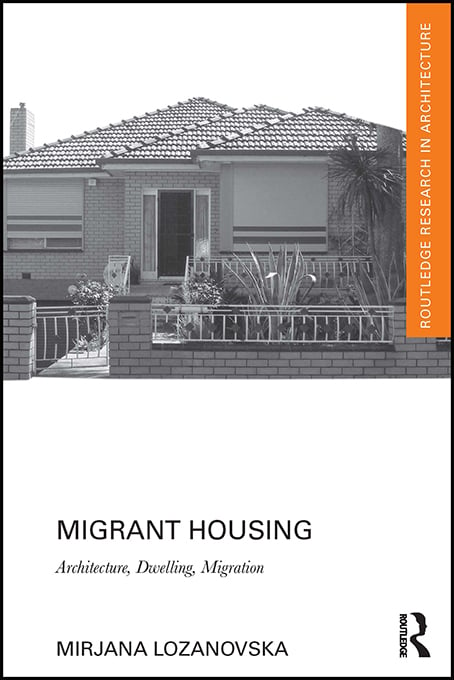 Australia welcomed 4.2 million ‘New Australians’ to the country between 1945 and 1985 as part of the “Populate or perish” policy. Associate Professor Mirjana Lozanovska’s new book, Migrant Housing, investigates the impact these migrants have had on the architecture and aesthetic traditions of our major cities.

The book is available for purchase from the Routledge website with a 20% discount using the code SOC19 at checkout, please refer to the following flyer.

An article written by Matthew Guy on 10 April 10 2019 for the Alfred Deakin Institute details the publication and Associate Professor Mirjana Lozanovska’s research.

Associate Professor Mirjana Lozanovska’s  explained it’s an unmistakeable look in the suburbs of Melbourne, as well as other cities around the globe: white, faux-marble pillars and balusters, grand staircases to the front door in dark red brick, perhaps a sculpted eagle or lion on the front lawn by the lemon tree. 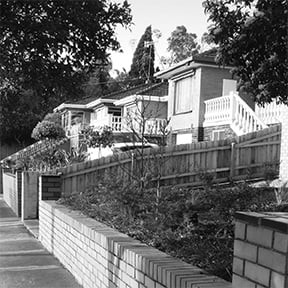 A Prof Lozanovska works in Deakin’s School of Architecture and the Built Environment with over thirty years’ experience as an architectural educator. She brings a unique and distinctive perspective to the discipline through her investigation of the creative ways architecture mediates identity and culture, with particular emphasis on migrant experiences.

“My research is about how architecture mediates human dignity,” said A Prof Lozanovska. “And this book is really a culmination of many years of research examining the house as the architectural construct in the processes of migration.”

Migrant Housing draws from material and data gathered over A/Prof Lozanovska’s 30 year career researching the intersections of migration and architecture, an area of inquiry near untouched at the beginning of her career.

In Migrant Housing, A/Prof Lozanovska points to architecture as a major driving force around discourses of cultural diversity in Melbourne, and indeed Australia. The influx of migrants from Southern Europe in the post-war period brought with them architectural elements now seen as iconic to Melbourne’s very identity.

“In the post-war period in Melbourne, architecture was the reason that culture was on the agenda for discussion. The whole idea of cultural difference emerged in Australia because of the very visual changes that Southern Europeans were making to the built environment.”

“The bigger windows and spacious front terraces, lemon trees planted out the front, espresso bars and cafes, these icons made the transformation of the city obvious to the majority of people living there. These were dramatic transformations to the built environment of the city, very noticeable and often greatly disparaged by the Anglo-Celtic communities.”

A/Prof Lozanovska calls these elements ‘an inscription on the landscape’. “These were dramatic transformations to the built environment of the city, very noticeable and often greatly disparaged by the Anglo-Celtic communities.” 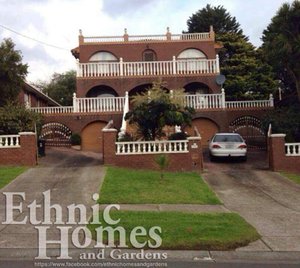 “These were dramatic transformations to the built environment of the city, very noticeable and often greatly disparaged by the Anglo-Celtic communities.”

“A whole new aesthetic appeared on the scene of the Australian landscape: cafes, ethnic clubs for playing cards, reception centres for weddings and dances, and parks for picnic gatherings. The very idea of urban culture, of walking down the street and stopping at a café grew from these communities.”

These changes in the background of the major cities helped to generate a whole shift in attitude towards migrant groups, contends A/Prof Lozanovska. Their visibility and the concentrated changes to the built environment pushed discourses of cultural diversity to the fore, and with the formation of research centres in the 70s to investigate these issues, we began moving from discourses of assimilation to integration, and then to multiculturalism.

Discourses around homeownership in Australia, particularly around access to homeownership also play a role in A/Prof Lozanovska’s book.

“Since the beginnings of Australia, the house has been put forward as the quintessential Australia icon. It’s an icon not only of belonging, but of having agency within the cultural and political framework of our society.”

“Even though these Southern European migrants had a really difficult time at the start because of the lack of access to loans or finance to purchase homes, there eventually emerged an equal if not greater home ownership statistics amongst them compared to the local, Anglo-Celtic community.”

“Australia was one of the few places that offered the possibility of permanent residency and even citizenship in the post-war period, which is one of the reasons why, despite the huge geographical barrier, it became a desirable place to immigrate to. Yet it was because of this distance that the dream of home ownership became so meaningful for these migrant groups. It was the only thing that could compensate them for the sacrifice they’d made to leave their homeland.”

A/Prof Lozanovska calls this concept ‘existential territoriality’; where for the newly-emigrated Southern Europeans, the house becomes a symbol for their capacity to exist with agency in their new home country.

“It was a form of empowerment, and a form of relief to have a place that made them feel capable and able to enact their own desires according to the architecture of the homes, the interiors and the gardens.”

It isn’t just Melbourne, or even Australian cities, under investigation in A/Prof Lozanovska’s book.

“The richest case studies in this book are Melbourne and Zavoj in Macedonia,” A/Prof Lozanovska said. “Migrant Housing is about both sides of the migration coin: immigration and emigration. It’s not only about cities of immigration like Melbourne, but also about the cities of origin and what happens to those places because of emigration.”

“I chose Zavoj because I wanted to select a village that didn’t have wealth flowing back into it, yet still undergoes architectural transformation. I wanted to show that even in places where the diaspora isn’t wealthy, that the village still transforms and that this is symptomatic of many sites of emigration.”

Bringing in case studies from a range of other sites – including Sweden, Canada, South America, the US and Mexico – A/Prof Lozanovska seeks to describe the global nature of this phenomenon.

Migrant Housing: Architecture, Dwelling, Migration is available for purchase on the Routledge website with a 20% discount using the code SOC19 at checkout, please refer to the following flyer for the full details. Further discounts may be possible for bulk orders, please contact A/Prof Lozanovska directly if you wish to be included in the next bulk order and for full details.

Works from A/Prof Lozanovska and her students Vanessa Napiza, Samantha Jackdon, Chayakan Siamphukdee, and Jacqui Jeavons were displayed at TERRAZZO, an exhibition hosted by DiMase Architects in April in Fitzroy North, Melbourne.

“Terrazzo is a study of the visual power and presence of migrant houses in the Australian landscape. Looking at the migrant houses, again and again, and reorganising their visual representation, experimenting with how visual strategies may affect our perception. Working with Deakin architecture students to develop these. Do they become beautiful? Viewers are invited to review this architecture and the parameters of each of our aesthetic borders.”