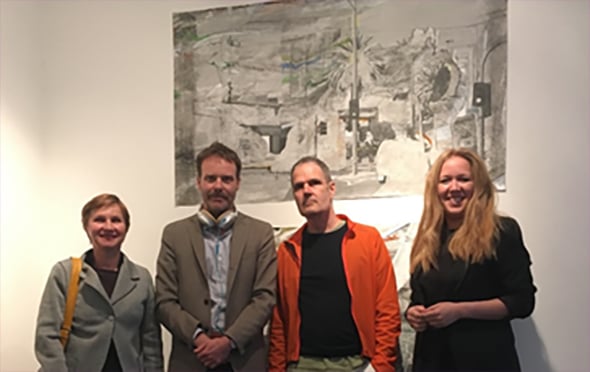 Deakin University’s #VacantGeelong project was at the centre of a round table discussion at the London Festival of Architecture (LFA) recently.

‘The discussion was directed towards the title Vacant, Reading Material, Memory – memory was the theme for the festival – with a focus on interpreting Alex’s work,’ Dr Lozanovska explains.

‘It centred on several points including the impact of the artistic works on the audience and their understanding of the material, the realities of vacant lots and vacant industry, and their role in the city.

Through the #VacantGeelong project, a team of artists, Deakin researchers and students, and community groups are working on a vision for Geelong that celebrates and builds on its industrial history, its culture and its potential as a creative and clever city.

Artists and researchers have confronted the vacant spaces of Geelong’s industrial past and revealed stories, and practices rooted in place.

‘The LFA is a major annual event in London. This illustrates the impact of the #VacantGeelong project in the artistic and scholarly community,’ Dr Lozanovska says.

‘The interest that was raised demonstrates that the while the project is focused on Geelong, it is exploring major issues that resonate in many parts of the world.

‘Amongst other things, the LFA round table discussion has provided a very good basis for the development of the structure and objective of the symposium to be held in September at the National Wool Museum in Geelong in conjunction with the #VacantGeelong exhibition Iconic Industry.’

The #VacantGeelong team is Dr Mirjana Lozanovska, Dr David Beynon and Dr Diego Fullaondo from Deakin’s School of Architecture and Built Environment and Dr Cameron Bishop from Deakin’s School of Communication and Creative Arts (SCCA), as well as a major contribution by SCCA’s Dr Anne Wilson. #VacantGeelong acknowledges the support of Creative Victoria and the City of Greater Geelong.